The Memory of a Nation

‘Geography is dynamic history, and history is static geography’. So said the brilliant Egyptian scholar Gamal Hamdan, author of the book, The Character of Egypt. In this sense, time and space are one vessel containing and protecting events within the folds of documented memory. While each historical event has its heroes, those who follow and document the event can also be seen as protagonists. Since its founding in 1875, al-Ahram Foundation has taken upon itself the responsibility of recording, in various ways, both written and graphic, the different events that Egypt has witnessed. Believing in the importance of visual memory, and that documentation should reach beyond political events to encompass all areas of life, al-Ahram has always been keen to safeguard creative works. In the process, the foundation has amassed a collection of Egyptian art that has become one of the most important non-museum collections in the Middle East.

Al-Ahram Foundation began collecting varied works by the pioneers of modern Egyptian art in the 1960s. After the military defeat of 1967, Egyptians were eager to eradicate any signs of the loss through art, which in one way or another led to cultural enrichment. It was within this climate that al-Ahram acquired works by the most prominent artists of the time. The foundation also commissioned wall art for many of the open spaces within its then new premises which still stand in Galaa Street in downtown Cairo. This project was backed by the chairman at the time, Mohamed Hassanein Heikal, and supported by the renowned writer Tewfiq el-Hakim. With time, the collection flourished, and today it encompasses more than 850 works of art by artists such as Mahmoud Saїd, Ragheb Ayad, Seif and Adham Wanly, Kamel Mostafa, Ramsès Younan, Inji Efflatoun, Gazbia Sirry, Gamal el-Segini, Tahia Halim, Ahmed Abdel Wahab, Adam Henein, Sabry Ragheb, Salah Taher, Omar al-Nagdy, George Bahgory, Mostafa al-Razzaz, Helmi al-Touny, among others. The collection also includes works by artists who worked at the newspaper itself, such as Salah Jaheen, Nagy Kamel and Makram Henein.

The pace of acquisition has varied over the years depending on management interest, the accessibility of funds and the availability of exhibition and storage space. In the early 1990s, an annex was added to the original al-Ahram building, triggering a new wave of acquisitions. This happened again in 2004 with the addition of a third annex. Today, the collection encompasses all art forms, from paintings and sculptures to wall art and photography. Recently, an artistic renaissance has been taking place at al-Ahram as part of an effort to strengthen its role as a cultural beacon in the Middle East. A team of specialized experts has been given the responsibility of restoring, documenting and storing the art collection. The acquisitions department also submitted an ambitious plan to revive the art procurement process and found a museum to house the collection and make it available to the public. In the meantime, a gallery is currently being established foundation premises to exhibit parts of the collection and host a variety of local, Arab and international fine arts events. The first of these highly anticipated events was ‘Al-Ahram’s Artistic Memory’ which was held in April 2016, to be followed by other exhibitions worthy both of the collection and of the foundation.

All images are courtesy of al-Ahram Foundation.

Georges Sabbagh, The Nilometer, 1941. Charcoal on paper, 124cm × 104cm.
The oldest piece in the al-Ahram collection, the drawing depicts Egyptian labourers constructing the Nilometer. The piece is stamped with the Sabbagh Atelier signature.

Hamed Abdullah, Abstract Composition, 1969. Acrylic on cardboard, 86cm × 66cm.
A self-taught artist, Abdullah (1924–1990) managed to establish himself by his twenties and eventually taught others such as Inji Efflatoun and Tahia Halim (who he later married). In this painting, he depicts two individuals using wide, abstract brushstrokes.

Salah Taher, Abstract Composition, 1972. Oil on canvas, 120cm × 90cm.
Taher (1911–2007) graduated from the Ecole des beaux-arts in 1934, became director of the Museum of Egyptian Modern Art in 1961 and director of the Opera House in 1966. He was also an artistic advisor for al-Ahram and the collection includes seventy of his pieces. This painting is often referred to as The Pilgrimage as it depicts groups of people circling a central point.

Tahia Halim, The Light, undated. Oil and gold leaf on canvas, d. 150cm.
Considered one of Egypt’s most successful female artists, Halim (1919–2003) exhibited her work in many countries and was granted several national and international awards. She studied at the hands of several artists, most notably her husband, Hamed Abdullah. She embraced diverse themes throughout the many stages of her career and her subjects included motherhood, landscapes and nature with undertones inspired by Nubian and Coptic art.

Mahmoud Saїd, La femme aux yeux bruns, 1943. Oil on wood, 87cm × 57cm.
One of Saїd’s most iconic works and considered the crown jewel of the al-Ahram collection, the painting depicts one of Saїd’s many working-class models, posed slightly unconventionally in the same manner as the society ladies who frequently posed for him.

Inji Efflatoun, Harvesting, 1968. Oil on wood, 71cm × 51cm.
A staunch political activist, Efflatoun was jailed from 1959–1963 and produced many darker paintings from inside her prison cell as well as brighter paintings of the world outside in her trademark pointillist style. This happier, lighter style became her trademark after her release. 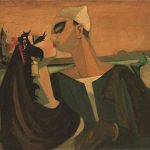 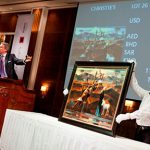 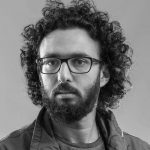 Maher Dawoud is an artist, professor and curator. He received his PhD in visual arts in 2013 and represented Egypt at the 56th Venice Biennale. He is the former director of the al-Ahram Foundation’s Acquisition and Exhibition Department, where he was overseeing the restoration and documentation of the foundation’s historic art collection.