The 18th-century European travellers were fascinated with Egypt, its mysterious history, opulent arts and grandiose sites. These travellers often returned home with notes and drawings recording what they had seen, but although their accounts represented the start of Europe’s interest in Egypt, they weren’t the spark that truly inspired European jewellers to work in Egyptian styles. In fact, it was Napoleon Bonaparte’s 1798–1801 military campaign that led Europe to finally discover ancient Egyptian civilization. Afterwards, with Champollion’s decipherment of Egyptian hieroglyphs in 1822, Egyptology as a discipline was born. This was soon followed by the founding of the Louvre’s department of Egyptian art, the French Oriental Institute in Cairo and, of course, the Egyptian Museum in Cairo. The growing craze – or passion – for ancient Egypt was strongly evident in the Art Nouveau movement (1895–1914) and reached its peak in the Art Deco era (between the two World Wars), bolstered by the discovery of Tutankhamen’s tomb in 1922.

EGYPTOMANIA
In the West, the 19th century was a great period of eclecticism that included nostalgia for national history and the fashions of past civilizations, re-envisioned in the taste of the day; artists produced works in various styles, including Greek revival, neo-Roman, neo-Renaissance and, of course, neo-Egyptian.

Certain major events over the past two centuries have also proven the endurance of ‘Egyptomania’, starting with the publications following the campaigns of Bonaparte, and continuing with the opening of the Suez Canal in 1869. The Paris World Exhibition in 1900 gave the public the chance to view archaeological remains, and was followed eleven years later by the Franco-Egyptian exhibition at the Louvre. The discovery of Tutankhamen’s tomb in 1922 by Howard Carter cemented ancient Egypt in the popular imagination, and was followed by the erection of the Obelisk of Luxor in Paris in 1936, the Tutankhamen Paris exhibition in 1967, and subsequent Tutankhamen-themed exhibitions in Basel (2004) and Los Angeles (2007). This is not to mention ‘Egyptomania’ at the Louvre in 1994 and recent exhibitions featuring reproductions of Tutankhamen’s tomb and its associated objects in various cities around the world. Even today, it is still common to see objects and jewellery, luxurious or not, inspired by Pharaonic Egypt. In movies, comics, games… Egyptomania lives!

But it was the early 20th century, between the years 1910 and 1930, that was the richest for works of art, monuments (such as the Luxor Cinema in 1921), sculpture (Père Lachaise cemetery in Paris), painting (Ciurlionis), and the decorative arts, including Egyptian-style jewellery. European jewellers, and especially the French, found in ancient Egypt a true source of inspiration; they were inspired by motifs such as the lotus, papyrus, scarab beetle, cobra, hieroglyphs, characters, sphinxes and temple pylons in their designs, or incorporated actual ancient elements in contemporary jewellery.

At the end of the 19th century, Art Nouveau swept away all the obsessions with the past, which had been endlessly copied and recopied. In France, Belgium, England, Italy, Spain, Austria and even the United States, there was the birth of new styles and forms in all areas of art, and especially in jewellery. Artists dared to finally free themselves from the conventional bourgeois art of the Second Empire; though the past still served as their inspiration, they invented new structures that were less symmetrical and with new lines, this time thin and sinuous. The themes remained the same, but were viewed from another angle: the most hated insects, such as wasps, and the most unattractive birds, such as crows, began to appear on lovely brooches and rings. Women transformed into dragonﬂies or butterﬂies. Thistles, brambles and weeds were placed in the spotlight.

Among the insect figures depicted by Art Nouveau jewellers, beetles are the most prominent. The scarab beetle – a symbol of the rising sun, and thus of life, rebirth and fertility to the Egyptians – was highly appreciated by Lalique, the most iconic French jeweller of the Art Nouveau era. In the two gouache paintings seen here, the first is an oval-shaped pin, which takes the form of the insect, its legs deployed within the general shape. The second is a drawing of an Egyptian-style pectoral; here, the scarab has outstretched wings, and its overall form appears like amulets found in the tomb of Tutankhamen. However, the alternating colours of the feathers, and the white, blue and green scales above the feathers are pure European fantasy.

ART DECO
The Art Deco style, born after the First World War as a reaction against the overly complicated forms of Art Nouveau, was also rich in the creation of objects, works of art and Egyptian-inspired jewellery; the work of Cartier, Van Cleef & Arpels, George Hunt, and Boucheron, in particular, overﬂow with Egyptian inspiration.

Magnificent and rare Egyptian-revival faience and jewelled brooch, with the figure of the goddess Bastet surrounded by a lapis lazuli sky with diamond stars. Cartier, London ca. 1923.

LA MAISON CARTIER
La Maison Cartier was particularly distinguished for its production of Egyptian-themed art. Louis Cartier owned all the books on Egyptian art available to him, and the pieces created by his house reﬂect his interest, whether they were pendants, brooches, belt buckles, or earrings. This 1923 faience and jewelled brooch designed as an Egyptian fan, or ﬂabellum, centres around an ancient faience bust of the goddess Sekhmet, depicted with a solar disc and a uraeus (cobra) upon her head, set against a lapis lazuli sky twinkling with diamond stars. Of course, it is worth noting that the Egyptians did not use precious stones, only ornamental ones and sometimes semi-precious stones. Faceting was unknown in ancient civilizations too, and only appears at the end of the Middle Ages. Additionally, platinum was not used in jewellery before the 19th century.

THE CREATIONS OF VAN CLEEF & ARPELS
Van Cleef & Arpels are also known to have created some famously beautiful neo-Egyptian pieces. Above is a beautiful bracelet from 1924, featuring platinum, white gold filigree, brilliant-cut diamonds, rubies, sapphires, emeralds and onyx. It displays various similarities to ancient Egyptian styles, including its overall size, as Egyptian bracelets could be quite large, while its hinged cloisonné details present two Egyptian women in loin cloths, wearing wigs, sitting on their heels face to face either side of an offering table. Papyrus motifs adorn the set, all using a fashionable polychrome palette: sapphire blue (lapis lazuli), emerald (green), ruby (carnelian), then black and finally white (gold). Artists of the Art Nouveau and Art Deco eras created styles with well-characterized forms and themes of their own. However, when it came to Egyptian inﬂuences, they did not differ much from their 19th-century masters. They re-envisioned elements, themes, shapes or materials, usually removing their original meaning to make patterns that were exclusively decorative; in this manner, a symbol of eternity and rebirth became a fashionable motif.

Though vanished for two millennia, Pharaonic civilization is constantly resuscitated through the study of history,exhibitions, political events, and archaeological excavations. Maybe nobody believes in the Egyptian gods anymore, but the world is definitely still fascinated with them. Isis with her ankh-symbol and Osiris with his djed-pillar have lingered and conquered many generations in the Western world. Whatever happens, Egypt continues to attract the world through its pyramids and monuments, as well as its smaller wonders, its jewellery and seal-rings; all are products of Egypt’s captivating mystery.

Egyptomania
Jewellery
This article was first published in print in RAWI's ISSUE 7, 2015 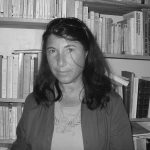 Ania Guini-Skliar holds a doctorate in art history from Paris. She teaches History of Art and Jewellery at l’École Van Cleef et Arpels of l’Académie des Métiers d'Art, and organizes guided tours in Paris. Passionate about art, she is also a poet, artist and author of several books.