In the quiet backstreets of Old Cairo, a traditional art is being lovingly revived. Craftsmen are once more creating pottery and ceramic designs drawn from their nation’s rich heritage.

Many people, visitors and locals alike, enjoy meandering around the tranquil streets of Old Cairo. They might arrive by taxi or by the nearby metro, but they all tend to head straight for the same places: the newly renovated Coptic Museum, the neighbouring ancient churches, and the Synagogue of Ben Ezra. Little do many know, however, that when walking these ancient streets they’re also treading near the ruins of one of Egypt’s most important cities, a place that still remains a hub of traditional craft more than one thousand years after its founding: the medieval city of Fustat, located just behind the Mosque of Amr Ibn al-‘As.

Fustat was founded in 641 by Amr Ibn al-‘As, who succeeded with his Arab troops in establishing the first Islamic capital of Egypt. The city was initially known for its settlements of different Arab tribes, and later as an important centre for the production of pottery. Even after the national capital was moved to al-‘Askar in 750, followed by al-Qata’i‘ in 868, and finally al-Qahira in 969, Fustat remained an important, wealthy commercial and trade centre until it was burned down by fires meant to thwart any advances by the Frankish Crusaders, in 1168. Today, the ruins of the Fustat archaeological site are all that remains of this once thriving and bustling city. Nevertheless, although the inhabitants are long gone, the ceramic styles that surrounded them have been given a second life thanks to the craftsmen of the Fustat Traditional Ceramics Centre.

Taking the road that leads to the Fustat archaeological site, the Ceramics Centre is an imposing white building located on the right hand side. It has a history that dates back to 1958, and was built at this location because Fustat was always the fakharin (potters) area. Historically, potters, ceramicists, and their suppliers have worked in this part of Cairo for centuries, evidenced by the many ceramic sherds and other artifacts unearthed during excavations over the previous century.

The current building was erected in 2001, and was designed and built by Gamal Amer, one of Hassan Fathy ’s disciples. Amer designed the Ceramics Centre in a style reminiscent of that of his mentor, with a dome, cascading arches, open-air courtyards, vaults, and a spacious, well-lit interior; it is almost entirely built from indigenous materials. Within, spread across its 2,400 square metres of space, are workshops and exhibition galleries, where craftwork is produced and displayed, as well as teaching areas, where artists are taught traditional techniques.

The men who direct the centre are just as impressive as their surroundings. Haytham Hedaya is a ceramicist with a degree from the Faculty of Applied Arts at Cairo University. He is the art supervisor at the Ceramics Centre, where he has been employed since 2002, starting out as an artist specialized in painting on ceramics. Working with him is Mamdouh Sakr, the local coordinator of the Prince’s School of Traditional Arts (PSTA) – one of Prince Charles’ London-based charities offering graduate degrees in traditional arts and crafts (http://www.psta.org.uk). Sakr is an architect by training with an MA in Islamic art and architecture from the American University in Cairo.

Together, they have conceived a series of workshop to help revive traditional craft techniques by training both potters and ceramicists at the Ceramics Centre. To understand the concept of their workshop fully, they gave me a tour of the centre one hot summer day. First, they led me to the production area, and explained the different stages of pottery production. The first stage in the process is the preparation of the clay – Aswan clay in this case – followed by shaping using either the wheel, press mould or jiggering – a machine used for the shaping of clay into flatware, such as plates. Once the clay is shaped and molded it is fired for the first time, producing a bisque (clay that has been fired but not glazed). After the first firing, the product receives a slip coating upon which the painting and decoration is applied. It is then glazed and fired for the second time. Although there are many types of ceramic wares, the process briefly described creates ‘underglazed painted wares’, and is used to create the beautifully elaborate plates, bowls, vases, tiles, coasters, cups, figurines, and decorative lamps manufactured at the Ceramics Centre.

The impetus for the partnership between the Ceramics Centre and the PSTA stems from HRH Prince Charles ’ Cairo trip in March 2006 to inaugurate a one-month crafts exhibition at the Palace of Amir Taz. Although all of the traditional crafts on display were made by the PSTA’s students in London, the exhibition prompted a cooperation with the Egyptian Ministry of Culture to set up a series of training workshops at the Fustat Traditional Ceramics Centre that would be operated and run by the PSTA. Initially, the ministry recommended and suggested several locations to house the training programme. However, the Fustat Ceramics Centre was ideal because they had the manpower (there are currently three assistants whose primary responsibility is to prepare the clay, four potters and ten designers/artists), appropriate facilities, and the requisite resources.

Starting in May 2006, tutors and alumni from the PSTA in London gave a three-week introductory workshop in Cairo to assess the level and skills of the potters and ceramicists, as well as the Ceramics Centre’s facilities. At the time, the instructors were focussing on two subjects: design and technique.

The design part of the workshop offered practical, hands-on intensive lectures in geometry, floral patterns, and observational drawing, supplemented by field trips to Cairo’s many historic monuments. The aim was to encourage and motivate the participants to acquire influences from their immediate surroundings and draw inspiration from the local traditional architecture that abounds in the city.

The technical component, on the other hand, introduced the trainees to kilns and how to make use of local or locally available materials to make traditional ceramics. The success of the workshops, which ran from May 2006 through to the end of 2007, eventually developed the ceramics production to be more focused and practical. Innovative shapes, complex designs and patterns were introduced.

According to Hedaya and Sakr, the outcome of these successive workshops resulted in a dramatic increase in the quality of production at the Ceramics Centre, with a marked improvement in glazing, painting, designing, and in achieving appropriately proportioned vessels. Moreover, for Hedaya, the PSTA created an environment that enabled him and the trainees to improve the final product by learning new techniques.

So far, the repertoire of designs used are mainly based on Ottoman floral motifs and geometric patterns, but others are derived from Egyptian folk, Fatimid, Abbasid and contemporary arts. Some of the shapes even have Predynastic and later Pharaonic forms.

Painting on the “bisque” before glazing.

I asked Sakr how he felt about the training programme and the quality of the ceramic wares. His answer, ‘At the start, back in 2006 when HRH Prince Charles opened the exhibition, crafts inspired by Islamic art were brought to Cairo from London. Since then we have really focused our attention on reviving the Ceramics Centre by improving the quality of the wares; after all, Fustat has a long tradition of making excellent ceramics. I think we succeeded! We have since sold some of the products we’ve made in London, which, in my opinion, is important because exporting high quality ceramics is the best way to promote Egyptian crafts abroad’.

Opposite the Ceramics Centre is the Fustat Traditional Crafts Centre. It was erected in 2005 (also designed by Gamal Amer) and falls under the auspices of the Egyptian Ministry of Culture. The Crafts Centre focuses on the production of quality stucco windows, in the same vein as those installed in traditional and historic buildings throughout Cairo; brasswork, that is both pierced and carved; turned wood (mashrabiya), which is masterfully crafted into windows, tables and other small furnishing items; khiyameyya patchwork, that can easily compete with anything sold in Khan al-Khalili; and jewellery. As well as being sold at the Fustat Traditional Crafts Centre, all the crafts, from ceramics to jewellery, woodwork, khiyameyya, gypsum, glass and metalwork, are also available at the Sabil-Kuttab of Abd al-Rahman Katkhuda on al-Mu‘izz Street and at the Wikala of al-Ghuri located at the intersection of al-Azhar and al-Mu‘izz Streets. All of the crafts are based on traditional motifs, yet maintain a high level of quality. In addition to the designs currently available, the artisans at the Crafts Centre work on commission, so if you ever need a unique gift at an affordable price stop by the centres in Fustat or one of the other two outlets.

Crafts
This article was first published in print in RAWI's ISSUE 1, 2010 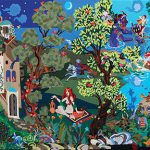 The art of Egyptian tent-making can be traced back into ancient times, but as with many traditional crafts, it is struggling to survive in the twenty-first century. 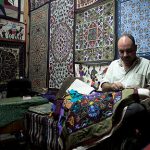 Traditional Egyptian crafts are in danger of becoming extinct, though with support they could be a major source of revenue and pride for Egypt’s population. This is a look at how the industry operates, and what it needs. 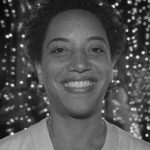 Iman R. Abdulfattah received her BA from New York University and an MA in Islamic art and architecture from the American University in Cairo. She previously worked for Egypt's Supreme Council of Antiquities as an Islamic art historian and was involved with several museum and heritage projects. She is currently pursuing a doctorate degree in art history and archaeology at the University of Bonn.