Searching for the Traditional Jewellery of Nubia

Nubia has a rich history of distinctive jewellery, with each style given its own name and imbued with individual meaning. Although today it may be difficult to find pieces made in the traditional ways, it is not impossible.

Woman wearing a variation of the dugga choker necklace, a nugar , a beiah collar, and a typical set of three earrings.  Photo dated between 1961 and 1963.

ABDEL FATTAH EID, COURTESY OF THE RBSCL, THE AMERICAN UNIVERSITY IN CAIRO

It is quite a challenge to find Nubian jewellery in Nubia today. One can scour the markets of Aswan, Kom Ombo, and even Daraw (where the main jewellery market for local women stands), and barely come across even two or three pieces of traditional jewellery. Where has it all gone? Well, most researchers – including Anne Jennings in her book, The Nubians of West Aswan: Village Women in the Midst of Change, and Ali Zain el-Abidin, author of The Crafting of Traditional Nubian Jewellery (Arabic) – believe that the Nubian jewellery tradition that had survived and evolved from its ancient roots began to be ‘retired’ in the 1970s and 80s. First, as Nubians prospered thanks to the ﬂourishing tourism industry after the construction of the Aswan High Dam, and President Sadat’s special attention to Aswan, the older silver jewellery came to be exchanged for gold. Then, as Nubians became exposed to the culture of the Arab Gulf, traditional gold jewellery was exchanged for more generic types. Men who had gone to work in the Gulf returned with the customary long gold chain necklace with a Koran box pendant; since it was associated with the newfound afﬂuence of the family, and was an explicit religious symbol to boot, this necklace became a status symbol, replacing the elaborate and varied repertoire of Nubian gold and silver jewellery that constituted a bride’s dowry and the base of her collection. Nubian women began to sell their older pieces to have them melted down and fashioned into more modern, yet generic designs.

UNDERSTANDING THE NUBIANS OF EGYPT

Most of the land that constituted Egyptian Nubia has been underwater since the construction of the Aswan High Dam in 1964. This territory was inhabited by three distinct Nubian peoples, who later migrated to the villages of New Nubia (50km from Aswan). The first and largest group is the Mahas-speaking Fedikat, the word meaning ‘those who escaped from the South’. The second group is the Metouki-speaking Kenouz, their name meaning ‘those coming from the East’. The third group – the smallest in number and inﬂuence – is el-Olaykat who are the Arabic-speaking Nubians of Bedouin heritage; these are the proclaimed descendants of Okail ibn Ali ibn Abi Taleb, great-grandson of the Prophet Mohamed. There are also, of course, the Nomadic Ababda and Bisharis, who dwell between Sudan and the Red Sea. For the purpose of this article however, we will focus on the gold jewellery associated with the three major groups inhabiting Nubia.

WHAT EVERY WOMAN MUST HAVE

Although the three major Nubian groups like to distinguish themselves from one another, and typically live in a state of subdued rivalry, their jewellery, and especially the bride’s dowry, does not differ much. A typical Nubian woman values her jewellery so much that she will wear her golden necklaces to the field for a long day of labour. Nubian jewellery also reﬂects feelings and status. A mother-in-law wanting to show high regard for her son’s bride will visit her in full regalia, wearing her finest pieces. If she doesn’t hold the bride and her family in high esteem, she displays it through her lack of adornment. Likewise, a widow, having just lost her husband, must not be seen wearing jewellery, with the exception perhaps of just one piece: the Jakid-necklace from her dowry; this, however, should be worn over her back, rather than her chest. Girls receive gold gifts from infancy; these are mostly family heirlooms, given to the girl by her mother and female relatives, as it is not until she becomes a bride that she receives the bulk of her collection. The jewellery component of a Nubian girl’s dowry differs only slightly from Kenouz, to Fedikat, to the Arabs of el-Olaykat, and some popular pieces include:

The jakid necklace is a staple of every Nubian bride’s dowry. It typically consists of six plain, ﬂat, round gold discs surrounding a central medallion pendant. The designs of most Nubian beads can be traced back to ancient Egypt, but it is the jakid’s ﬂat, round disc that display the most obvious connection, and can be immediately associated with the sun god Amun Ra.

This interesting piece is uncommon among the Fadikat, but is otherwise popular among Nubian women and can be interpreted in several ways. On the one hand, the discs that form its ornaments seem to be inspired by the double-drum instrument of the same name. On the other hand, its discs, and the ten-petal ﬂower motif (the number five and its multiples being commonly considered to ward off evil), can be regarded as eyes, and the tube connecting them, as eyebrows. Eyes, of course, have been used as protective amulets since ancient times.

A major status symbol, the full beiah collar typically consists of six pear-shaped, gold drop pendants, embossed with star and crescent shapes, surrounding a medallion pendant called a masha-Allah (although it does not normally have any inscriptions on it). The Kenouz women usually use a crescent shaped pendant in place of the medallion. Zaytuna beads are placed between the pendants as separators. The word is said to mean ‘shiny, gleaming object’.

The dugga with sa’af beads

A choker necklace, the dugga – said to mean ‘fine object’ in Sudanese – is typically formed of twenty-four elongated gold beads, six spacer bead ‘boxes’, thirty-six gold octagonal beads, and a number of onyx beads. Blue or green beads complete the choker at the back. Of course, due to personal taste, or sometimes budgetary constraints, the number of gold beads in the choker can vary. There is some evidence that the dugga has existed for millennia. Indeed, the tomb of Prince Khufu-Khaf, built during the Old Kingdom contains an image of Khufu-Khaf’s wife wearing a choker-necklace with spacer beads, very similar in design to the dugga.

Nubian earrings take many forms, each with its own name, and are very popular among women, who sometimes wear three on each ear, starting from the helix, down to the lobe. Younger women no longer follow this style, but the basic designs of the earrings remain. The upper and middle pairs were called tamim, and the lower pair zimam kabir or zimam boba. The crescent-shaped tamim usually have an embossed design of birds and vegetation. The zimam kabir are also crescent shaped, but are divided at the bottom, with geometric designs etched on the surface.

Bride and groom on their wedding day. The bride is wearing a gasset el-rahman head ornament and a beiah collar. Photo dated between 1961 and 1963.

ABDEL FATTAH EID, COURTESY OF THE RBSCL, THE AMERICAN UNIVERSITY IN CAIRO

A head ornament, gasset el-rahman is ﬂat and triangular with a rectangular extension at the top from which it hangs. The triangle – a popular shape in Nubian art – usually symbolizes success; when the apex is up – if the triangle is inverted – it symbolizes land and water. The inner design is reminiscent of the tao cross. In ancient Egypt, a lotus ﬂower was worn as a head ornament in a similar fashion; it is therefore possible that the use of this jewellery originated in ancient times, and was later inﬂuenced by Christianity. For a long time, Christianity was the dominant religion among the Nubians, particularly the Fadikat, who were the last to convert to Islam; it is thus unsurprising that the Fadikat are the group most often seen wearing this ornament.

Although Nubian jewellery has become quite scarce, it has not yet fully vanished. A little ‘digging’ led me to discover that most Nubian jewellers live in Cairo and sell their work back home. Could this be because metalsmiths are somewhat stigmatized in Nubia? After all, it was metalsmiths who once made the shackles used by slave merchants. This could be a reason, but no one knows for sure. In any case, this stigma is now lifting. If you’d like to buy an authentic piece of handmade Nubian jewellery, drop by Ahmed Awad Gasser’s store on 200 Tahrir Street in the centre of Cairo. Enjoy a unique piece of jewellery with a long history. 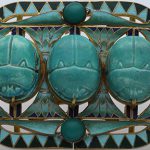 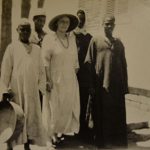 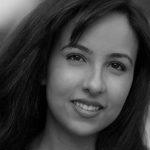