Providing for the Pyramid Builders

What was on the menu for the builders of the pyramids? And who was responsible for providing the supplies?

How were the pyramids built?’ is one of most common questions I get when people learn that I am an Egyptologist. They expect answers about miraculous engineering feats, or alien knowledge, or even magic, but they never expect the answer I give them, ‘The pyramids were built by well-fed people!’

A reconstructed typical bread mould at Heit al-Ghurab with the pyramids in the background.
Tons of bread mould sherds have been excavated at Heit al-Ghurab. Reconstructions indicate that the moulds came in three standard sizes to ensure that workers received standard quantities. Money not having been invented yet, these rations constituted the workers’ wages, and they had to be distributed fairly. On average, the capacity of the largest bread mould is 7.7 litres which is equivalent to approximately 4.2 kg of flour. Each mould thus produced a loaf that could feed 8–10 people, 15 if they had some beer to go with it.

Building the three Giza pyramids was a major state project. Ancient Egyptian engineers, architects, and stonecutters had to be mobilised in large numbers to create one of the seven wonders of the ancient world. While millions of people may stand in awe of these monuments today, few consider the logistics and organization involved in their construction, least of all the food, drink, and accommodation required for the massive workforce.

The pyramid builders, estimated at around 8,000 to 10,000 persons at any given time, lived in a town near the pyramids that was dedicated to precisely this purpose. Popularly known as the Lost City of the Pyramids, this was where the people involved in the construction and maintenance of the pyramids of Khafre and Menkaure lived. A section of the city walls survives until today and extends over 200 metres. This wall was a prominent feature of the site and is known today as Heit al-Ghurab, Arabic for ‘The Wall of the Crow’. Archaeological work in this area has revealed the remains of the worker barracks, as well as of the mansions of officials and the smaller housing of their support staff. Several workshop areas and storage facilities have been discovered as well. The large amount of archaeological data from the site has helped us understand what people ate and the logistics and economics of food provision, providing estimates of how many people and settlements were required to keep the pyramid-building workforce well-fed, healthy, and probably happy, too.

Bread made of emmer wheat and barley was the staple for the workmen. The wheat and barley were cultivated elsewhere in the Nile Valley and brought to the site for storage in massive granaries. First, the grains were sieved to remove any contaminating weeds and then manually ground using a so-called saddle quern. Results from experimental archaeology indicate that 400 kg of grains, the daily requirement to feed all the workers in the barracks, were ground for six arduous hours by 100 people every single day. Water was then added to the flour, and the dough was kneaded before it could finally be baked into bread.

Located in the barracks themselves, the bakeries at this site featured large ceramic vats. The bases of these vats had been damaged at some point and later reinforced with pieces of limestone or granite. They were probably damaged while the ancient bakers were kneading the dough with their feet. The dough was probably quite soft, which we know from Old Kingdom tomb scenes, and was poured into clay moulds, known as bedja. We also know from tomb scenes that the bedja moulds were first stacked upside down on an open fire to preheat them. The filled moulds were then placed upright in the fire and each covered with a second one to allow for even cooking. Thousands of these moulds and mould fragments were discovered in Heit al-Ghurab.

An artist’s rendering of the workers’ barracks of the Lost City of the Pyramids based on archaeological findings. Whereas the galleries housed the workers who served the king for a one-month period, it was in the eastern part of the Lost City of the Pyramids that the town’s long-term residents lived. This scene reimagines a three -room house within a mudbrick compound and shows women weaving and spinning while others bake bread, prepare food, and take care of other chores. Plant and animal remains show that the bosses and overseers living in the larger houses got the best cuts of meat and a greater variety of food. In comparison, the simple workers had a less diverse diet, with poorer cuts of meat, smaller fish, & far less variety in their vegetables.

A sufficient fat intake is crucial for the maintenance of a healthy nervous system. Animal bones from the site indicate that bone broth and marrow from animal sources were consumed. These are exceptionally high in fat and would have easily filled the daily quota, providing vital extra calories. Fragile leafy greens rarely appear in the archaeological record and are therefore more difficult to talk about. Pulses are also rare, because they need to be cooked thoroughly, which renders them difficult to identify by specialists. Beer was made of barley, which may have been malted, and certainly had to be mixed with water before straining.

Providing for the pyramid builders was a titanic task. The infrastructure necessary to supply the barracks with sources of animal protein was astounding. Fish, birds, and wild game were procured locally, while cattle, sheep, and goat were raised in the Delta in state-sponsored settlements established specially for the purpose. Although far fewer cattle were consumed, beef was still eaten twice as often simply due to the substantially larger size of the animal.

Animal remains at the site suggest that 5,110 cattle and 15,220 sheep/goats were consumed annually. All these had to be transported to Heit al-Ghurab to be slaughtered, butchered, and finally distributed. Such a supply would have required a herd of 23,701 cattle and 72,554 sheep/goats and a total of 1,566 km2—5% of all land in the Delta—to maintain them. In terms of labour, 577 cattle and 3,160 sheep/goat herders were needed. Factoring in their families, the central government must have established settlements with around 20,000 people devoted only to raising animals for the pyramid workers—around 2% of the population of the entire nation.

The logistics for other provisions are equally impressive. To make bread, hundreds of litres of water had to be collected every day and transported to the site just to produce the dough, with hundreds more necessary to quench the thirst of all the humans and farm animals. The animals were slaughtered with tools, which had to be made and transported to the site. The fish that supplemented the workers’ diets had to be caught with nets, which also had to be produced. Granite was brought in from Aswan, 600 km to the south, while cedar wood used as timber for boat building was imported from 600 km to the north.

Every ancient Egyptian 10-day week, 3,840 kg of barley, 3,920 kg of emmer wheat, 10 cattle, 36 sheep/goats, and 1680 kg of fish were necessary to sustain the 10,000-strong workforce. The pyramids could not have existed without these immensely sophisticated logistics, a monumental achievement just as deserving of our admiration as the magnificent structures themselves.

rawifood
This article was first published in print in RAWI's ISSUE 10, 2019 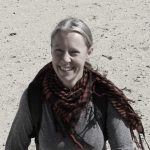 Claire Malleson is assistant professor of archaeology at the American University of Beirut, where she teaches Egyptian Archaeology and Archaeobotany. She is also archaeobotanist and director of archaeological science at Ancient Egypt Research Associates. Her main research interests are in ancient agriculture, diet, and nutrition.