The Stock Certificates of Egypt’s Bourse

An Archive in the Cloud?

Researchers often feel that heritage in private hands is lost to enquiry, but through the publication of such collections, the widely dispersed and inaccessible becomes assembled and available to all, and heritage previously thought lost can be saved for posterity. The 'lost' history of Egypt's stock certificates is a case in point.

The history of the Cairo Stock Exchange had to be told…as it became one of the leading exchanges in the world, wrote H.H. Prince Abbas Hilmi in the preface of The Egyptian Bourse, authored by historian Samir Raafat and published by Zeitouna early in 2011. His preface also referred to the stock exchange certificates that were issued to raise capital through the Egyptian Bourse saying that ‘all sorts of companies were formed: industrial, development, transport, banks and the like… and it quoted companies in Egyptian Pounds as well as Pounds Sterling, Swiss Francs, French Francs, Belgian Francs and U.S. Dollars.’ This statement inspired the author of the book and its publisher and designer, Sherif Boraie, to consider illustrating it with the colourful stock certificates issued by the listed companies.

But how and where could those stocks certificates be found? One would think that an institution as important as the Stock Exchange would keep samples of each  certificate in their archives. Apparently – and sadly – not. Twenty years ago, Samir Raafat approached the administration of the Bourse, seeking any archival material or certificates that would help him explore its history and enable him to understand the nature of its early operations. The result? He was informed that they themselves had searched for such material to no avail. It is thus not surprising that the Egyptian Bourse and its role is understudied and marginalized in authoritative works; indeed, David Landes, in his thorough and referential research published in Bankers and Pashas: International Finance and Economic Imperialism, was forced to rely heavily on relevant documents found in various European institutions instead of material from Egypt’s Bourse.

COMPAGNIE UNIVERSELLE DU CANAL MARITIME DE SUEZ
The Suez Canal Company was Established by decrees of the Viceroy Of Egypt on November 30th, 1854 And January 5th, 1856, and confirmed by the firman of the Ottoman Sultan On March 19th, 1866. The company’s Concession allowed for operating the Canal for 99 years from November 17th, 1869 at the expiration of which The Canal would revert to the Egyptian Government. The company’s main Objective was the construction of the Suez Canal and its operation.

THE CAIRO ELECTRIC RAILWAYS & HELIOPOLIS OASES COMPANY
Registered on February 14, 1906 to acquire from the Egyptian Government a 7-year concession granting the right to build electric railways between Cairo and adjacent districts. In 1941, the company operated the following services: 1. Cairo (Emad el-Din) to Heliopolis (Ave. Ismailia); 2. Heliopolis (San Stefano) to Abbassia; 3. Heliopolis (Almaza) to Palais-de Koubbeh. The agreement also included the purchase of 5,952 feddans (acres) in the Abbassia desert near Cairo (later increased to 11,902 feddans) for the company to reclaim and build a new town (Heliopolis) with the amenities of a modern city.

Accordingly, both Raafat and Boraie quickly understood that they had to look beyond the boundaries of the stock exchange for relevant visual archival material. But this brought its own problems. It was not feasible, given the publisher’s time constraints, to contact the listed companies (if they were still operating or had not been sequestrated) to inquire into whether they still had samples of their stock certificates issued half a century ago or even earlier, while a quick search in international libraries and research institutions known to hold material on Egypt revealed that it was beyond their scope of specialization. Before despair set in, as a last resort, they decided to knock on the door of private collectors. Raafat and Borei started to approach their friends and acquaintances in the circle of economists, philatelists, numismatists, book dealers, and collectors of Egypt’s nineteenth and twentieth century ephemera only to discover that no single collector had sufficient stock certificates. Their real challenge thus became to assemble a borrowed corpus from the holdings of various collectors. After a week of hunting and inquiring into certificates, the outcome was a pool of five serious collectors who possessed, and were willing to publish, some of the choice issues from Egypt’s Stock Exchange. Ironically, none of the contributors knew what the other four possessed, or indeed who they were, and thus each of them eagerly awaited the release of the publication not only as an introductory historical document, but also as an accumulation of coherent puzzle pieces virtually assembled in one unit.

FAYOUM LIGHT RAILWAYS COMPANY
Construction commenced in 1898 by private enterprise under a concession granted by the Egyptian government for 70 years, expiring on august 15th, 1972. at expiration, the rights of the concessionaries revert without compensation to the government, which also had conditional purchasing rights at any time after April 1945. in 1906, the Anglo-Belgian company of Egypt ltd., having acquired the majority of the shares, assumed control. in 1939, Joseph Kfoury, who operated a number of motor bus services in al-Fayoum, acquired an important interest in Fayoum light railways, and was appointed managing director. a motor-bus and lorry service, complementary to the railway, launched on October 24th, 1935.

Both Prince Abbas Hilmi and Sherif Raafat, the author’s brother, collected stock certificates while living overseas. Having spearheaded major investment firms listed in European bourses, they developed a nostalgia for their own country’s stock certificates, and sought to acquire some as memorabilia of the glory days of Egypt’s economic history and its stock exchange. They made their purchases from antiquarians, book dealers, and auctions, and, over time, the walls of their offices became mini-museums, displaying the acquired colourful certificates of Egypt’s Bourse. Led by the drive to include additional certificates, both Raafat and Boraie sought out collectors from beyond the circles of the brokerage companies, the stock exchange experts, and the financiers. They found the trophy of all stock certificates in the holdings of one of their mutual acquaintances, Khaled el-Tawil, who, from a specialized Paris auction, had acquired the indisputably rarest and most expensive of all Egyptian stock certificates, that of the Canal Maritime de Suez. The Compagnie Universelle, as it was known then, had issued several certificates each with a different value; the green 250 French Franc certificate was issued in 1924. The earlier Suez Canal bonds are the dream of all five contributors to this publication, as well as other worldwide collectors, who actively keep an eye out for their appearance in famous auction houses. I myself, within the last 15 years, have formed an extensive stock  certificate collection which, in contrast, has not resulted from my involvement in, or the study of, the modern economic history of Egypt, nor the stock exchange business, but rather was driven by the artistic and visual value of stock certificates reﬂecting the neo-Pharaonic and neo-Mameluke waves of Egypt’s search for identity. Most of these were purchased either in the Azbakiya book market or from rubabikiya (secondhand object) peddlers.

THE LAND BANK OF EGYPT
Authorized by the Khedivial Decree of January 10, 1905 with the right to operate for 99 years to grant loans for mortgages — repayable either at long or short terms and with optional redemption — to estates owners in Egypt. It also purchased mortgage debts and opened current account credits on mortgages. To meet the annual requirements of cultivators and landowners, it advanced cash on a non-mortgage basis within the value of the profits yielded by the land, and cashed their bills to order against endorsement.

If, in this case, the stock certificates served as a visual tool to illustrate a coffee-table book, their emergence as a corpus drew attention to their potential as a primary source that captures an aspect of Cairo’s Stock Exchange operations, as well as many facets of Egyptian culture and society during the late Nineteenth Century and the first half of the Twentieth Century. For the more in-depth researcher, stock certificates can be better analyzed in the light of the Stock Exchange Yearbooks that were compiled and edited consecutively by Elie Politi and then Clement Levy. Unfortunately, although these yearbooks were officially published, they seem equally difficult to find in specialized libraries, as well as at Dar al-Kutub. The realization of the dispersal of the Stock Exchange certificates and yearbooks is an implicit call to the Bourse institution to initiate a collection project culminating in a public library that would host, among other relevant documents, an exhaustive collection of stock certificates and other derivative published material. If well-populated, such a library would become a specialized research centre that would set a best-practice example for other Egyptian institutions founded in the thirties to establish their own study circles and revisit and renovate of their own original archives/libraries.

Compiled essentially from the albums of various private collectors, The Egyptian Bourse revealed above all the importance of creatively supporting the non-institutional specialized collections, family papers, and photographs which can, as evidenced by this example, be an instrumental tool in the writing and reinterpretation of Egypt’s modern history. The crucial question of how such private collections can be unearthed may not have any definitive answer, as stumbling upon them is often a matter of luck; nevertheless, it remains the role of activists and sponsors to organize symposia and to compile archives in order to render the unearthed collections available to researchers and seekers of knowledge. Unintentionally, The Egyptian Bourse achieved not only a spontaneous collection development goal, and encapsulated it in a book, but introduced the concept of an ‘archive in the cloud’ by virtually capturing family papers and certificates from diverse private collections and rendering them available to researchers at large. Will post-revolution Egypt have more such cloud archives? Expanding the same topic and exploring many more?

All images are courtesy of the author.

Collections
Twentieth Century
This article was first published in print in RAWI's ISSUE 5, 2013 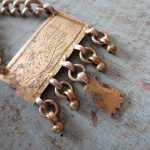 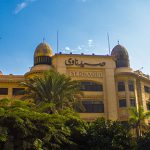 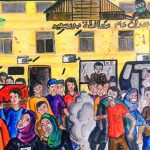 After having discovered a series of children’s paintings depicting war scenes from 1956, RAWI invited Port Said's children once more to express themselves through art and tell us about their lives over the two years following the revolution of 25 January. 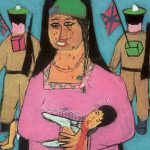 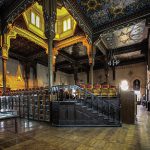 Associated with great scientists and intellectuals, from Napoleon's savants to modern scholars, the recently destroyed Institut d'Égypte played a major role in Egypt's intellectual history, and led to the foundation of further centres of learning. 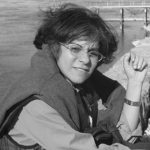 Ola Seif is an art historian, freelance photographer and collector of Egypt-related visuals. In her book (1990) and MA thesis (2005) on the Khan el-Khalili bazaar, she mapped the district and traced its historical development from a residential to a commercial neighbourhood. Her current research interests include the pioneer European photographers in Egypt and Antoine Selim Nahas’s modern architecture in Cairo.