A Home in Rome

The Egyptian Academy of Fine Arts in Rome

Established in 1929 thanks to the vision of painter Ragheb Ayad, the Egyptian Academy of Fine Arts in Rome—which remains highly influential to this day—is a tribute to the multiculturalism that typified the Egyptian art scene of the early twentieth century.

In 1921, two young Egyptian artists, hungry for knowledge, made a deal: each would work for a year as an art teacher in Cairo to finance a year of art study in Rome for the other. First, Youssef Kamel went to Rome while his friend Ragheb Ayad stayed in Cairo to teach and send money to Kamel. Once Kamel’s year was over, he came back to teach and Ayad went to Rome. News of the two artists’ arrangement captured the public’s imagination and encouraged the Egyptian Parliament to allocate a sum of £E12,000 to finance art scholarships abroad. In 1926, the Ministry of Education awarded three scholarships for study in Rome to Youssef Kamel, Ragheb Ayad and Mohamed Hassan. A sizable portion of the scholarships was donated by Prince Youssef Kamal, the founder of the Ecole des beaux-arts in Cairo.

A 1926 issue of Al-Musawwar magazine, reporting on the visit of Ahmed Fahmy el-Qattan Bek (front row, first from left) and Camillo Innocenti (front row, third from left), both supervisors of art education at the Ministry of Knowledge (later, of Education). The caption reads, ‘the visit is a testament to our government’s special attention to the arts.’ They are joined in the picture by Sadek Pasha Henein, Egypt’s minister plenipotentiary in Rome (front row, centre). The three Egyptian artists awarded government scholarships to study art in Rome stand behind them: (left to right) Mohamed Hassan, Youssef Kamel and Ragheb Ayad.

Rome inspired Ayad, and in 1926, he made a historical proposal to Ahmed Zulficar, minister plenipotentiary at the Egyptian embassy in Rome. In it he suggested the establishment of an Egyptian art academy in Rome and drew a vivid picture of why it was necessary to create an Egyptian house of art and creativity in the eternal city. Ayad’s aim was not only to promote Egypt’s magnificent historical and cultural heritage, he was dreaming of a platform to display the multiple facets of modern Egyptian art and present it gloriously, like that of the Western world’s. His words were poetic and sincere and he emphasised the benefits of exposing young Egyptian artists to the creativity and artistry that permeate every corner of Rome.

The Ministry of Foreign Affairs adopted the impassioned proposal and forwarded it to the Cabinet, which, in turn, issued a decree establishing the Egyptian Academy of Fine Arts in Rome modelled after other foreign academies in the ancient European capital.

1929: A HISTORICAL TURNING POINT FOR THE ART MOVEMENT IN EGYPT

The Egyptian Academy was founded in Rome in 1929. Egyptian artist Sahab Almaz was appointed its first director by King Fouad I who took considerable interest in the institution and covered all of Almaz’s expenses in Rome. From a temporary location near the Coliseum, the academy later moved to its current location at the Valle Giulia— on the grounds of the Villa Borghese where the most important foreign academies are located—in return for a land grant from the Egyptian royal palace to build the Italian Institute for Archaeological Research in Cairo.

THE EGYPTIAN ACADEMY OF FINE ARTS IN ROME

Salah Abdel Kerim created many playful pieces of pottery, such as this 1957 water jug or ‘olla which he produced during his two-year stay in Rome.

THE EGYPTIAN ACADEMY OF FINE ARTS IN ROME

The Egyptian artists who were awarded scholarships at the Egyptian Academy in Rome soon found themselves immersed in an open museum where art of all kinds—Etruscan mosaics, classical sculptures, Renaissance paintings, Baroque piazzas, neoclassical fountains and everything in between—was practically in the air that they breathed. Exposed to different schools of thought and philosophy, these young artists were instrumental in creating a flourishing, cosmopolitan, yet uniquely Egyptian, art scene when they returned to Egypt. Recently, the Egyptian Academy in Rome celebrated ninety years of its establishment with an exhibition on the pioneers of Egyptian art. Al-ruwwad (the pioneers) were the driving force behind the development of Egyptian modern art and included luminaries such as Mahmoud Saїd, Mohamed Naghi, Georges Sabbagh, and of course, Ragheb Ayad and Youssef Kamel.

A Tribute to Ragheb Ayad

Today the Egyptian Academy in Rome stands as a beacon of Egyptian, Arab and African art in Europe. After undergoing a large-scale renovation in 2008, the academy now includes residence quarters and studios for Egyptian art students in Italy, as well as a cinema and theatre, a library and several exhibition areas. It boasts an impressive collection of modern art and regularly hosts prominent Egyptian artists, intellectuals and exhibitions such as the recreated tomb of Tutankhamun.

Ragheb Ayad dreamed of promoting Egyptian art throughout the world. To honour his passion and vision and in recognition of the opportunities he created for subsequent generations, the graduating class of 2014 was named the ‘Ragheb Ayad Graduating Class’. It is now their mandate to continue to forge new paths in art and culture.

This article was first published in print in RAWI's ISSUE 8, 2016 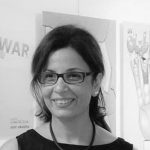 Gihane Zaki studied at Helwan University (Egypt) and Université Lumière Lyon 2 (France) where she received her PhD in Egyptology. In addition to teaching at Helwan University, she has represented the Egyptian government at the UNESCO Convention Concerning the Protection of the World Cultural and Natural Heritage. She is currently the director of the Egyptian Academy of Fine Arts in Rome.